Black gunk around dog’s nipples are usually nothing to worry about but can also be an indication of a small problem.

15 Reasons: Why Your Dog Keeps Licking Their Base Of Tail

The color of a dog’s nipples may change over time, but if the nipples appear to be growing progressively darker, it could mean something is wrong. The following can cause dog scabs on nipples:

6 Causes Of Black Gunk Around Dogs Nipples – How to Treat Inverted Nipples?

Melanoma is one of the most common types of skin cancer in canines and can be deadly if not treated. Melanoma is a malignant tumor that originates in the melanocytes, which are cells found just below the surface of your dog’s skin or their mucous membranes.

Sebaceous tumors and cysts form when the sebaceous glands produce an excessive amount of sebum (oil). They can grow rapidly and can become very large without treatment.

Mammary duct ectasia may cause dark spots on your dog’s nipples under certain circumstances. This condition happens when mammary gland ducts increase in size and number and occurs most often during pregnancy and lactation. It usually goes away after weaning and isn’t life-threatening but will need to be done by a veterinarian for changes throughout the dog’s nipple.

Skin cancer is usually a type of squamous cell carcinoma, which often appears as a small, rough growth or as a flat lesion with scaly edges. Some signs that your dog may have skin cancer include lesions that bleed easily, ulcers, crusty areas, and raised lumps/bumps on the surface of their skin or around their nipples. Skin cancers are typically caused by sun exposure, so be sure to keep your pet out of direct sunlight whenever possible.

Mastitis is an infection of a dog’s mammary glands and will cause dark spots on the nipples as well as inflammation and increased warmth in these areas.

Folliculitis is an infection of follicles and can cause dark spots to appear on the skin. It’s usually due to a blocked hair follicle that becomes irritated or an infection caused by hot spots. If this appears, your dog will likely have other symptoms such as redness, itching, and bumps developing around their nipples.

If you notice any of the above symptoms in your pet, call your veterinarian right away for diagnosis and treatment. Early diagnosis can help increase the chances of successful treatment for these life-threatening conditions, so don’t wait if you think something is wrong.

10 Reasons: Why Your Dog Sneezing a Lot

Why is my dog’s nipple black and crusty? 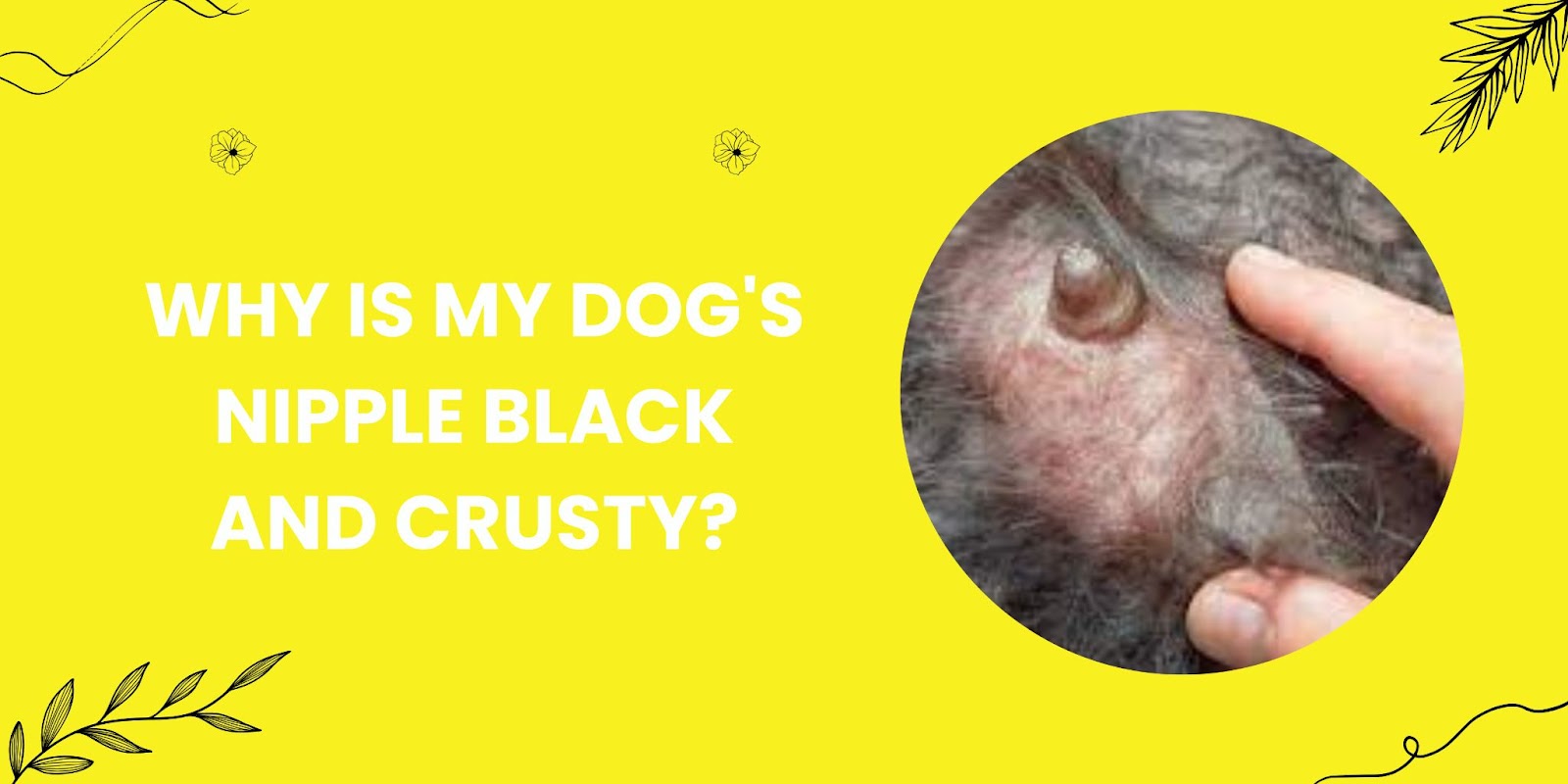 Dogs naturally produce a natural oil that protects their nipples’ moisture and hydration. This natural oil can sometimes become dirty from your dog’s environment, causing the nipples to turn brown or black.

There are many possible reasons for your dog’s nipple to be black and crusty. Since dogs have mammary glands, when they are in heat, this usually is normal. But when the female is not in heat, the issue might be physiological or hormonal instead.

Lactating females have black crusty nipples. This is because, during lactation, the nipples are changing all of the time. Sometimes, the nipple may feel moist, while other times, it could feel dry or scaly. There can also be dark redness in color on some parts of the labia and clitoris instead.

10 Behavior: Why do Dogs Stretch when they see You

How to treat the inverted nipples on a dog?

The inverted nipples are a common problem in all breeds, but it occurs mainly in large and heavy dogs with big teats. But sometimes, even very small puppies can have inverted teats.

There is no medical treatment for inverted nipples, but a surgical procedure can be applied. The inverted nipples should be treated as soon as possible because it can lead to breast abscesses and mastitis. In many cases, teat inversion means a more serious disease, so the veterinarian should investigate further so he/she can determine the exact condition of the dog’s mammary glands.

Inverted nipples occur as a result of tissue adhesion between two or more nipples (the same apply to mammary gland tumors), and if this condition is not treated in time, the condition will become chronic and can result in abscesses. If teats are inverted for several days, this should be taken into consideration. The inverted nipples in dogs are very similar to common cysts that also occur in dogs’ mammary glands.

The best treatment for inverted nipples in these breeds is surgery, which can be performed by most veterinarians familiar with the procedure. Surgery usually involves removing skin and some glandular tissue to allow normal placement of the nipple in its proper location on top of the mammary gland.

Sometimes it is necessary to place a small metal stent or wire under the inverted nipple and attach it to a nearby area of skin before surgery if the inverted nipple is especially long, as these dogs often have little glandular tissue near the surface.

6 Things: You Can Do To build confidence in a dog

Mastitis in dogs is one of the most common infections caused by bacterial pathogens. It occurs when infective microorganisms enter through an opening, wound, or abrasion and attack the mammary gland. Lactating (milk-secreting) glands are more susceptible to infection than non-porous glands; however, various risk factors may increase the likelihood of mastitis occurring in any gland. Once an infection is established, it can often become chronic.

Diagnosis for an infected lactating gland usually begins with a thorough physical examination of the affected breast or mammary glands. A culture may be performed on tissue samples to help determine what microorganisms are causing the infection. The use of a mastitis vaccine may be suggested depending on the results from these tests.

Symptoms for this condition vary depending on the underlying cause as well as which gland is infected. In mammary glands, mastitis can occur in any or all of four different locations: two teats and two glands (located before and after the mammary glands).

Symptoms of mastitis can be inflammation and swelling, heat and redness (erythema) of the affected area, a watery or blood-tinged (serous) fluid discharge from one or both nipples; fever; wheezing; lethargy; anorexia.

Affected dogs may feel discomfort in the area of the infection; however, pain is limited in most cases. Mastitis may develop gradually or suddenly.

5 Breeds can Swim: Are Chihuahuas Capable of Swimming?

Black Gunk Around Dogs Nipples Treatment must begin as soon as an infection is suspected in order to reduce the likelihood of complications developing and include: ceasing all nursing activities (i.e., removing milk with a manual pump or by placing hot compresses on the teats); placing an indwelling urinary catheter for draining the bladder and flushing the urethra; antibiotic therapy (oral or injectable); anti-inflammatory medications.

In severe cases, surgical intervention may be suggested to remove accumulated milk from the glands in order to reduce pressure. Dogs with chronic infections have a guarded prognosis. While some dogs may recover fully, others can develop difficult-to-treat infections that require long courses of antibiotics to resolve.

<a href="https://dogzgroomer.com/springer-spaniel-haircut/"> Springer Spaniel Haircut Pattern in 2022</a>